My work has me lucky enough to work with some of Australia’s best former, current and future athletes. Caitlin Basset’s form for the Australian Diamond’s of late, surely has her knocking on the door of Australia’s most in form athletes.

A stunning 47 goals from 47 attempts in game 1 against the Silver Ferns (NZ) was quickly followed by her highest ever shooting performance of 55 goals in game 3.

I spent an hour with the sharp shooter on ANZ’s Netball Nation Facebook Live Chat a few weeks back and thought it was good insight into who Caitlin Bassett is… Enjoy. 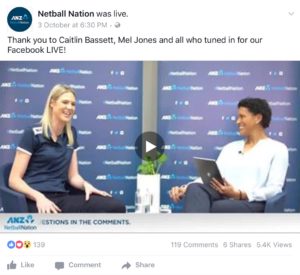