Today, almost 9,000 kms from Melbourne’s Shrine of Remembrance a group of Aussie and Kiwi’s from Team D were invited along to the Madras War Cemetery to attend the ANZAC Dawn Service.

Having had a number of family members serve and experienced first hand the atrocities of war and the long lasting physical, mental and emotion effect, I always like to, in some way, pay my respects as best I can.

Emma Staples introduced me to Tom Calder (of Mumbai Madness fame) over 6 years ago and since then when asked, and more so when not, he has helped me explore and experience things in India that have made for unique  and memorable experiences. Today was certainly one of them.

Knowing that the 100 year anniversary of the landing at Gallipoli was during the IPL, Tom got our team in contact with Grayson Perry at the Chennai Australian Consulate who invited our entire crew along.

At moments it was all quite surreal as we sang the National Anthem and listened to the Last Post while looking across the cemetery with poppies on the headstones of those 14 Australian and 6 New Zealand soldiers buried here. Usually on this day at 6am the sensation is numb feet standing on the concrete concourse at the Shrine, shifting slightly from side to side so as not to bump into people but to keep the circulation going and to keep warm. Watching the fog lift to expose the tens of thousands men, women and children all straining to get a glimpse of the ceremony but more often content to stand and soak in the words and silence. 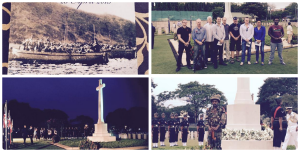 Chennai Dawn Service, was a 200+ affair with front row seats to the laying of wreaths from various consulates and Indian Defence Force services. The Saturday morning traffic and horns playing a loud and constant role and although 6am you could feel it was going to be another hot day had.

The service was followed by a Gunfire Breakfast and photographic exhibition ‘A Camera on Gallipoli’ taken by Australian soldier & surgeon Sir Charles Ryan in 1915. The imagery of the horrific conditions in the trenches not lost on us as we were treated a lavish breakfast at the Park Royal.

80,000 at Melbourne’s Shrine of Remembrance & 200 at Madras War Cemetery. All, taking time to reflect on a moment 100 years ago that went a very long way to defining us a nation and paying thanks to all those men, women and sadly so long ago boys, that have and still are proudly serving.