The trip to Chennai airport for the commentating team was fairly uneventful until we were almost run off the road by a police escort. Politician? Bollywood celebrity? Sunrisers Hyderabad team? No the IPL umpires! Three police cars at the front, three at back. Strange I thought they umpired OK the other night. 😉 Needless to say there is now an on going joke about where we actually stand in the scheme of things and what it would take for our own private police escort.

If I wasn’t laughing so much at Damien Martyn’s disbelief at the escort I might not have mad a bad rookie error that still has me fuming at myself. Having checked in my main bag and then queued for ages to get to the female security check point I was told to remove my bottle of wine…NOOOO!!!

A present for Alan Wilkins who loves his Australian chardonnay and would have, without a doubt, loved this one. With no time to go back and check another bag in, it became a present to Chennai airport security. The rather up close and personal body frisk by security didn’t help my mood either. Do you touch your partner like that? Wowsers.

Like so many other Indian cities – Madras to Chennai, Bombay to Mumbai, Calcutta to Kolkata, Bangalore has reverted back to a more traditional name of Bengaluru.

One of the noticeable differences between the two cities is that helmets are compulsory for motorbike riders in Bengaluru, unlike Chennai. However, it’s compulsory for the driver only from what I can tell. This is typically the male if the family is riding along which means you often see him driving… protected… with his wife and family (my record sighting has been 5 on a Hero Honda and it is a rather impress skill in itself) hanging on helmet free. I often wonder as he’s pulling on this life saving device if he ever thinks it might also be worthwhile buying a few more? 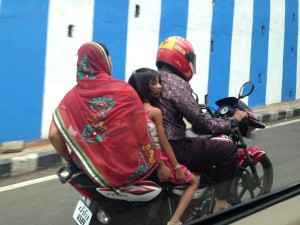 After settling in I had the chance to sit back and listen into Isa and Anjum that night as it was a Saturday which often means IPL double headers. The comments I’m hearing is that it’s great to hear a female voice talking cricket, it will just take a little getting used to the different pitch, but well worth it. Kicking some goals it sounds like.

In 1997 the Chinnaswamy stadium played host to a rather historic game of cricket. It was the South African womens’ cricket teams second game in their first ever World Cup and their first game against Australia after coming out of apartheid. There was a crowd of around 10,000 who watched a very competitive Sth African unit under Kim Price more than hold their own against an Australian side who were well ahead in terms of development, support and experience.

Ten thousand was a huge result for a women’s game in 1997 (who am I kidding, even today!) and my memory was it felt like 30,000. That crowd energy has not dissipated over the years in Bangalore. As I stood in the middle of the pitch interviewing David Warner pre toss, I realised I couldn’t hear myself talking as we went live to the stadium screen.

Rather than making sure I had my questions all in order I kept thinking the umpires might need that escort again tonight as the chance of hearing an edge was almost impossible! We so often think about the challenges for players but I really do have to take my hat off to the umpires as it’s a tough ask out there.

The RCB fans are renowned as being the loudest in the league and even though it was only half full, due to some bad weather, it felt like a cauldron of super hyped up, frenzied fans and they were on a high for 3 hours straight! It’s energy you just don’t get at home at a sporting event. It’s simply electric.

Chris Gayle smashed his 200th IPL 6 during his knock and also took over Gambhir as the leading run scorer which means he wears the Orange Cap until someone passes him. So a quick chat with him and Ravi Bopara at the change over and there adds another new addition to my game day duties.

Then my first ‘lead commentary’ stint in the second innings. Now, I have a feeling Mod our producer is one of 3 people who reads this blog (hi mum & dad) so I’m going to out myself and say I didn’t read the roster well enough and although knowing I was on for the 4 overs didn’t realise I was running lead. Probably the best way to go about – a massive dive in the deep end with my new found floaties called Mike Haysman there for support.

First up win for skipper Warner and the Sunrisers and their IPL title chase is off and running. My third HotStar cheque presentation and a surprise kiss from Chris Gayle. I might keep an eye on his next game to see if it was good luck or not. I’m not adverse to being a lucky charm.