Suzie Bates would have a better chance running up against Hilary Clinton in the upcoming US presidential race than winning a coin toss it would seem.  Another toss lost and another score to chase.

A hiccup in game one for the White Ferns in a small run chase, followed by a win with room for improvement and now a dominant display to take game three. This also means two more ICC Championship points and momentum going  into game 4 that will be hard for India to hold back.

Combine the entertaining play with my new found way of bringing (or most would say detracting) viewers to women’s cricket and all in all the game a had a bit of everything.

Let me get my rather awkward situation out first. As a BCCI.TV production the commenting crew are provided with branded shirts in which they took my measurements from the recent IPL.

A school girl error in not trying them on before the game is certainly my mistake. However, I’m going go with a new tailor, different material, incorrect measuring or all of the above which resulted in all 3 shirts being…let’s say….slightly tight across the bust area. I refute any comments that begin with “in a good paddock” or “commentators diet!”

So the morning of game one there was shrill cry echoing through Bengaluru as the meeting of buttons was as stretched as Greece’s savings account. 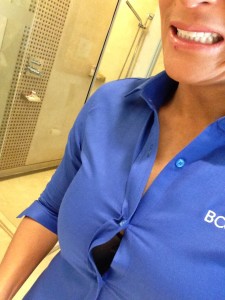 It was not pretty and numerous safety pins got me through the day before the tailor was called in on an emergency call. He had limited excess material to work with however it did result in some arm movement being allowed but still required some ‘decency pins’ to keep things above board.

My room attendant tidied my room far too well for game 3 and the pins went missing and ….well…apologies to the viewers. 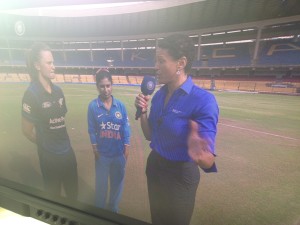 Needless to say a pack of 100 pins purchased and my usual 3rd helping at the buffet breakfast has been cut out.

More importantly the game and what I learned from both sides.

It was the Bates and Priest Show as the fairly new opening partnership for NZ took the game away from India with a 125 run opening stand. It wasn’t with some luck to start with as Bates was well caught at first slip by Sharma off Goswami only to be called back and given a free hit due to a no ball. I liked their approach to Bisht who opened and then Niranjana not allowing them to settle at all and scoring at will while playing Goswami on merit.

A little bump in the road when NZ lost both set batters within consecutive overs however 61 runs off 19 overs was never going to worry them too much. They also showed that seamers have a big role to play wicket wise in this series, something the Indian seamers haven’t been able to do. Devine this time picking up 3 with the spinners restricting runs and the NZ fielding unit enforcing 3 runs out.

Actually the fielding display was very slick with Bates, Perkins and Peterson all taking very sharp chances and Perkins run out of Kaur was built though Raj not wanting to take her on and the exception skill of a diving direct hit.

So where to for the White Ferns? Great to see Maddie Green get another go at #4 after the golden duck in game 2. She showed enough to give her some time to settle in this spot and with players like Bates and Satterthwaite around her she will learn quickly.

The ruthlessness needed to win World Cups is what I’d like to see from them as the next big step. Not letting teams back in when you’re in control is an art that I think you need to have to be at the top.

Wholesale changes for India with Sharma, Niranjana and Krishnamurthy coming in for Rana, Pandey and Raut. Krishnamurthy’s 63 (86) kept things moving for India but again no one could convert starts and at no stage did you every think they had complete control of the innings.

India are an enigma of sorts and completely frustrating to watch as the talent pool is obviously there. It might require a bit more digging while here to get a better feel for things however two key concepts that does stand out is that style of play and game sense are as crucial as skill set to winning games against the better sides.

So the win puts NZ up to 5th spot behind Pakistan on percentage and ahead of England. Keeping in mind England and Australia will be playing in a few weeks time to bring their games count up to 9 and level with rest of the teams. 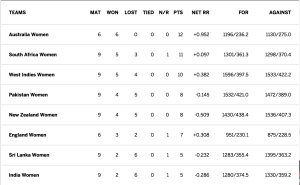 The Super Rugby Final is on today in New Zealand with the Hurricanes taking on the Highlanders. The White Ferns are evenly split in support for both teams across players and support staff. Needless to say the banter in the hotel room today could well provide for some good pre game chats on Monday for game 4.