It’s one of the most humbling moments for a cricketer to receive their Baggygreen.

I was privileged to find out yesterday it’s just as humbling to be given the honour of presenting one too.

Three debutants for Australia in the one off test received their first Baggygreen – Nicole Bolton, Kristen Beams and Jess Jonassen. Players 168, 169 and 170 respectively.

In a tradition that has developed in recent years the presenting of the Baggyreen is done on the ground by a former player to make the moment as memorable as possible. Former Australian captain Raelee Thompson presented to Nicole Bolton, former Australian player Lisa Sthalekar to Kristen Beams and I to Jess Jonassen. 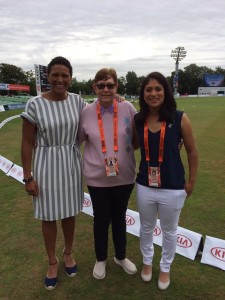 All three played, and are still playing, a crucial role in Australia’s first innings. JJ the largest with an unbeaten knock of 95 having come in with Australia at 4/84. Just 5 runs short off becoming the 13th player to score a ton on debut for Australia.