OK so straight up, I’m a pretty relaxed kinda gal. I love a joke, some banter and can take it as much as I give it, particularly with the men I work with in cricket and the media. And I too get a little exasperated at times where I think political correctness has gone way too far. I’m also not a fist punching, bra burning, in your face feminist and because of this I think I’ve surprised people in my reaction to the Chris Gayle, Mel McLaughlin interview.

Without any hesitancy, I wholeheartedly think Gayle crossed the line and people need to understand the why’s before they tell people like myself to lighten up. This isn’t about Mel McLaughlin and what she should or shouldn’t have done. And for all those knockers out there I’m fairly sure she has said nothing through this other than I accept his apology and want to get to back to work. A professional who handled herself well at the time and has moved on.

Let’s set the scene here. Chris Gayle, international cricket super star is at work with the Melbourne Renegades. Mel McLaughlin, Network Ten journalist is boundary riding and also at work covering the Big Bash game. Both getting paid to do a specific job and both do their roles exceptionally well.

Chris Gayle, don’t get me wrong here, has thought through what he is about to do. This isn’t an off the cuff comment, it is one he has used before to elicit a certain reaction and attain a personal goal. He wants to use this interview, with a massive TV audience, to create a scene that in his eyes makes him look cool with no regard of the consequences for others.

Although he says it was a joke, it was an “in” joke meaning that it was purely for him to get kicks out of, not a shared joke which makes everyone laugh. When Mel didn’t laugh and looked noticeably uncomfortable this was his cue to stop, to apologise. He didn’t do either as he continued on by using a line he has used before saying “don’t blush baby” which solely aims to put the person on the back foot so he has control of the dialogue.

I know it’s an awkward and uncertain space sometimes trying to be funny, and I honestly think some people don’t mean to cross the line. However, if they do, they need to man or woman up!

“There wasn’t anything meant to be disrespectful or offensive to Mel. If she felt that way, I’m really sorry for that.”

There are no “if’s” here! And anyone who is truly sorry would actually attempt to speak directly to the person they offended to understand the why or come out with a statement that reflects genuine remorse? The reaction from the wider community may feel out of proportion in comparison to other events going on and I think this is because of a few factors.

One because in Australia we are currently very aware of broader issues around respecting women. This could be a long bow for some, as he was just flirting and having some fun..right?

Wrong. The reaction from so many is because people are saying stop to people using their position of power to get away with comments that should not be made in certain situations. It’s out of proportion because Australia doesn’t want women doing their job to feel intimated or devalued. It’s out of proportion because you’re a repeat offender and finally people have said enough!

“It seemed to be blown out of proportion. There wasn’t anything at all meant to be disrespectful to Mel,”

He also hasn’t thought of how his actions would affect his employer, the Melbourne Renegades and BBL, who are trying to place themselves as a team and a competition that are family and female friendly. All athletes are part of a bigger picture. They should represent their team mates, team, the competition and most importantly the game itself.

By making a conscious decision, to place Mel McLaughlin on the spot to come across to people as a “cool dude”, “the man”, he had no regard for the consequences to others.

And let’s not use different cultures as an excuse either! Gayle has spent enough time in Australia, England, India, South Africa to know what is acceptable and what’s not. He knows this behavior isn’t tolerated in Australia yet went ahead with it anyway. My dad, a West Indian, and many others I’ve spoke to weren’t impressed either.

So it’s evident there are two camps of thought here. One, which I obviously sit in, which is of the belief he crossed the line and needs to be called on it and the other camp of it was a “harmless joke”, and “no one died” camp.

It’s harmful because not saying anything is a form of support and then people begin to think it’s OK to behave like this in any workplace. Remember this incident happened at work, not out socially. It’s harmful, Georgie Parker, because we want to be world leaders in sport in Australia and have a fun, energetic, vibrant, successful community for everyone to enjoy. We can do that by having a joke and some banter but it needs to be above board. 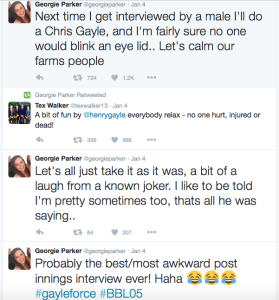 You’re right – no one died. And yes there are way more devastating and horrific issues in the news at the moment. The thing is we, your average Jo Blow, can’t do a lot to change these other events.

We can however make a positive difference to our culture by calling it for what it is and gradually changing the dialogue through level headed debate.

If you think this is over the top and the fun police are taking over, just pause to think if Gayle could’ve had some fun banter with McLaughlin in any other way? A way that was inclusive and relevant to the situation? Surely he can.

People are blowing up or more than simply commenting because we are in 2016 not the 1970s. We are in a time where we would like to think people can respect other people going about their job. That if you’re not witty enough to have a laugh with a reporter on air that doesn’t put her in an awkward situation at her expense then you’re at least smart enough to not say anything along those lines and stick to answering the questions.

We want athletes to be open and honest and not read from the hymn book. And the good ones, that’s most these days, can without sinking to comments that don’t support our society’s shift to an appreciative and supportive space. Nick Cummins, The Honey Badger, is brilliant and clever and unique – carry on. Brad Hodge gives us insight and a dry sense of humor in the heat of the battle on field – more please. Western Bulldog Robert Murphy is articulate, quirky, refreshing – love it.

So if you’re not witty enough to make people laugh without demeaning others (journos, other players, team mates, coaches you name it) let your bat/ball do the entertaining and keep your words for your social media platforms where people of the same ilk can enjoy it.

At the end of the day we are all navigating through new waters in the cricket world in particular. Yes there have been awesome female journalists paving the way for many years often coping the brunt of sexism and harassment. Cricket Australia, the BBL and Network Ten are leading the way in Australia with females commentating and reporting on TV in domestic sport. It’s new ground for all involved and there will be a few bumps along the way. We just need to keep checking in to ensure this is no excuse for poor behavior.

Finally to Chris Gayle, rather than taking the mickey out of the situation if you really want to turn this into a positive one and understand why it’s as big as it is I’m happy to sit down and chat through it – commentator to cricketer, woman to man, cricketer to cricketer.

And if you want to read a few more pieces that articulate it better than I;