A breakfast adventure with Daksha kick started the day perfectly. I met Daksha on EMP’s 2011 tour of India when we played two games in Chennai. Daksha had played state cricket back in the 80s and then went onto university and is now a doctor running her own business in TB vaccinations. Combine saving young children’s lives with working in a charity empowering young Indian students and constantly looking at ways to give back and you have one exceptionally impressive and inspiring individual.

As we chatted all things values, character and what are the things that matter most in life (deep for AM I know) the breakfast ordering was placed in her hands. Krishna is a food institution in Chennai having been around since 1935 specialising in southern Indian food.

Staple items like Idly – fermented rice which is then steamed into a patty, Dosai – rice and black lentil crepe and Poori – fried Indian flat fried that puffs up like a hollow ball were accompanied with a variety of lentil, coconut and potato condiments. Full was an understatement. Wash this down with a Badam Kheer – an almond based milk drink and a coffee and I was ready to take on the Sunrisers and Super Kings. 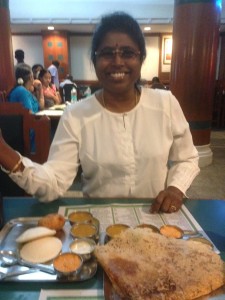 Two innings of class made this game one to remember. Brendon McCullum, in round one, played an innings almost a carbon copy of his World Cup final innings against Australia. Today he took a few sighters, just a few, to settle himself in and then promptly smashed it to every point of the ground for his 100 off the last ball.

Dhoni joined McCullum in the 14th over and set the parochial Chennia crowd a light! In a matter of balls he’d shifted the match into another ridiculously high gear with his 53 off 29. It’s difficult to describe how this man is treated in Chennai, without using the over used ‘god like’ phrase. He send the crowds into absolute frenzies and that’s just him standing there, paying them no attention at all. Then he’ll wave and the decibel level hits ear bleeding heights.

My cheque handing out form obviously impressed game one as I was again given the duties this time for McCullum at the post match. I thought I had connected with the Chennai crowd as I passed on my second HotStar award but as it turned out Dhoni had scratch his nose.

So Chennai 2 from 2. The Sunrisers having done well in the IPL auction to add to Steyn, Warner and Dharwan would have been disappointed with the result. The following game saw a loss for Kolkata at home against my other hot pick the Royal Challengers Bangalore. I can’t/won’t go back on my pick of Chennai for their third title but when Gayle and AB are in full flight it means RCB fans can be confident of a good season.

Speaking of which, off to the city of IT tomorrow for a stint working the Royal Challengers games.