“There is always room for improvement no matter how long you’ve been in the business.”

And with that our producer Michael O’Dwyer (MOD), has been working away on how we run the pre show to get the most out of everyone as well as engage, educate and entertain the audience. So a change up with the introduction of  a game analysis discussion by the commentators, who are usually more open and frank than players, and a reduction in the captain chats. MOD has been in the game for years and the boy from Berry has done it all and done it exceptionally well. A one liner for any occasion he has been a great sounding board and ‘go to’ on tour. 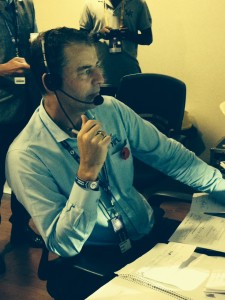 And while MOD is challenging us constantly on a professional level Scott Styris is challenging himself just as much individually. The Kiwi all rounder who himself has said is from the bogan capital of New Zealand – I wont divulge the town for defamation reasons – has alluded to on air that he could out dance Dwayne Bravo.

Now Scott is new to the D Team so a little get together at the hotel bar a few nights ago to welcome him lead to us taking over the DJ’s deck and this may have given me an insight into his music taste and potential rhythm from his love of 80s music. My gut feel, and I’ve been wrong before, is he might struggle against the West Indian who from the looks of things has scheduled Chennai Super King’s training sessions purely for wicket celebrations opportunities.

Needless to say when the IPL put out the word via their fan voting poll last night and asked who would win a dance off between the two all rounders within minutes it was a resounding 93% to Bravo. General consensus was the remaining 7% was a mix of not understanding the question properly, clicking the wrong box, being related to him or a collected effort from Bogan Brothers – NZ Chapter.

And for those thinking you can’t get a  good sample of people within a couple of minutes I was told that on average any IPL fan poll gets approximately 200,000 replies from people watching on line within that time frame!

So the game wash up was not great for last years finalists the King’s X1 Punjab as they lost again and are now bottom of the table. I doubt they’ll do much post game analysis and just chalk the 97 run loss up as shocker and move on quickly. On the flip side the CSK’s are flying and still with an unchanged team from 6 games are looking the goods to make yet another final series.

Scooting through the production area post match I saw this and had a good giggle. Lesley is our floor manager and the only female amongst 70 odd camera, sound and graphics guys in busy and cramped hideaway. More touring with boys differences to come. 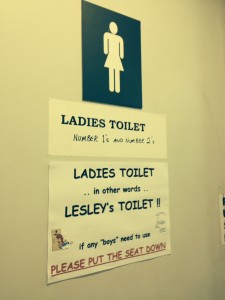 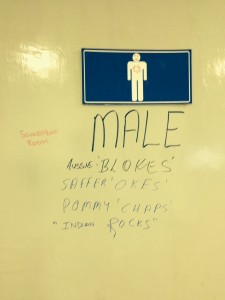