Right so WAY behind on the game updates but this is one I’ll need to cover as it could well determine who takes out this year IPL title.
It’s hard to know exactly what to put it down to but the unexpected curse I had placed on Chris Gayle is now well and truly broken. His run of poor form since my post match, HotStar cheque kiss was starting to worry me as he either failed or was dropped in games that I was commentating on but then scoring runs when I wasn’t there.

With RCB gaining momentum after a slow start, finally winning at home and looking to cement a spot in the top 4, I was slightly concerned that my presence for the game against King’s XI  Punjab was going to put a halt to their finals charge.

There were two key elements at play in my mind. Surprisingly the first was linked to he world of Astrology. It was that quirky and unexplainable act of not believing in psychics, palm readers or tarot cards until you’re told you could find the love of your life, earn significant coin, have a long & healthy life…or if you do as they say AND continue to see them…. All 3!

Arasu is our great audio man in Crew D. A lovely guy who I first met back on some ICC T20 World Cups. Turns out he also reads palms.

Now this isn’t a new thing for me. Many moons ago I went and saw a psychic with friends and other than being told I had a gypsy soul, a bright aura and some hullabaloo about Brazil I didn’t get a lot from it.

Fast forward a dozen years and I’m standing out in the middle of the Chidambaram stadium before the CSK v KKR match and we had sometime to kill. So left palm first, then right and because the reading was good, some great, I was all ears. But wait… then came the proviso. I need to do something to help these things come true. Hmmm …. non sequential rupees in a Goan account? No, just a suggestion I wear something white, jewellery preferably.

Then the second incident that I also think played a role in lifting the curse was a chance meeting before the game on the ground with Chris and a pre match peck on the cheek hello. Pre match not post match.

So with my new silver and pearl bracelet on – you knew I’d get something right?  A good luck peck completed we sat back in the comms box and watched one monster innings from Gayle. 117 off 57 including 12 x 6s and 7 x4s and some of cleanest hitting you’ll ever see that had the RCB Red Army in hysterics. As luck would have it I was also lead commentary when he brought up his 5th IPL ton. White it is Arasu.

Not a bad way to see out our last stay in Bengaluru. RCB on a roll and looking finals bound on current from. Discovered a very nice brewery – Toit Brewery – which provided us with a great afternoon of tastings. The hospitality of the Wakankar’s was simply outstanding at the Bangalore Club and then dinner chatting all things non cricket which is very refreshing on a cricket tour.

A very strong Aussie contingent for our next Chennai stay, much to Scott Styris’ displeasure. And a fair call too with an Aussie Director & Producer as well as Matthew Hayden joining Marto, Haze and myself. And for the record Scotty its not ‘bullying’ it’s friendly banter. Hmm that sounded a lot less like an excuse in my head.

Mind you it’s also fair to say that Scott has had many wins himself on tour at our expense. As with any touring group there is always the member who loves a prank, who excels at a constant little niggle and provides a quick (this will hurt me) often witty reply. Enter stage left – Scott Styris. And as you can see the usual reaction is either one of disbelief (Mod), mild amusement (Ravi) or as we are into a month together the standard ten count before replying from the rest of us. 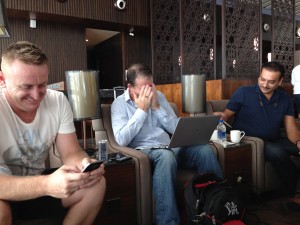