Two weekends down in the inaugural WBBL and all teams have played at least 2 games which has given us a little insight into how they are shaping up. Here’s a quick review of how your team is going and what they have in front of them next weekend. 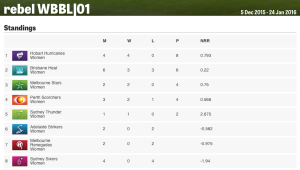 Have not fired on any fronts. Sara McGlashan hit the franchises first 50 (61 from 29) in the monster 190 attempted run chase against the Brisbane Heat and all rounder Marizanne Kapp’s first stint in Australia has been solid. However, the 6ers marquee player and captain Ellyse Perry has not found her feet with bat or ball and they will miss Alyssa Healy through injury. The Southern Stars top order bat and wicket keeper hasn’t recovered from a knock to the forehead during a WNCL match in early November.

Add to this a new captain in Perry who hasn’t captained at all at state level and whose club cricket games are limited (if any) due to football commitments, so finding form and working on tactical approaches is tough.

Up Next: Not pretty reading. The inform Meg Lanning and the Melbourne Stars and the powerhouse favorites the Perth Scorchers. There will be a few nerves around next weekend.

Most would agree that early wins would be crucial in this competition and the Renegades I think would have been happy coming back from Tassie with a 1-1 score line. However they ran into the surprise packet Hurricanes and are now 0-2. Two concerns facing the Renegades. One is they have batters who can score runs however they haven’t been able to do it at a  good clip of 120+ strike rate. The second is the balance of their bowling attack. Spin has always played an important role in T20 cricket however across the teams seamers have done a lot of damage and the Renegades have no senior bowlers to lead this attack.

And when your best batter to score at a decent rate get’s caught by a blinder you know it’s just not your day.

Up Next: And I thought the 6’ers had it tough! The unbeaten Thunder and the full of confidence Brisbane Heat… in Brisbane!

Playing away in Launceston the Strikers lost two low scoring games, one chasing and one setting, to the Hurricanes. The one to watch is again Megan Schutt who is having a standout year on the back of her  successful Ashes tour and WNCL season. The Strikers issue will be converting starts by the top order into scores of significance if they are to challenge next weekend.

Up Next : Two games against the Sydney Thunder and if there wasn’t enough pressure already a game against the Heat which will be the first televised WBBL match on channel One.

From the glimpse we got it looks like the Sydney Thunders’ women’s team isn’t following in the men’s footsteps! A more than convincing win started their campaign against cross town rivals the 6’ers. On a deck that was a bit slower than most expected the Thunder adjusted quicker. Once in they cruised under the guidance of West Indian Stafanie Taylor (yes a West Indian player in Australia who is doing well) and passed 103 with no issues at all. Experienced captain Alex Blackwell, miserly bowler Renee Farrell and young quick Lauren Cheatle all played an important role. 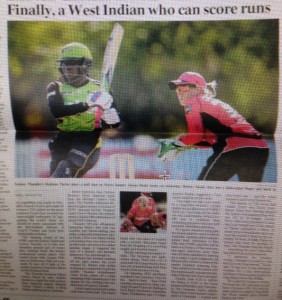 Up Next: 4 games in 3 days in Brisbane – Strikers, Renegades, Strikers & Heat on the one day. Stay hydrated!

Most peoples pick for the title in the pre series, the Scorchers have had a solid start. Splitting the games against the Heat they also  had an easy chase against the 6’ers and have shown they aren’t all about the batting line up. Katherine Brunt, Nicky Shaw and Suzie Bates have lead form the front with pace to create most of the break throughs.

What are the Scorchers About?

With new coach and former Australian player Lisa Keightley coaching the squad, Charlotte Edwards captaining, Katherine Brunt leading the attack and Deandra Dottin to come in for 6 games, they will be the team most will want to see play.

Up Next: Hobart Hurricanes x 2 and Sydney 6’ers

In a way it was fitting that the opening round of the inaugural WBBL was hosted by the Melbourne Stars as it meant Australian captain and world #1 batsman Meg Lanning had the chance to show the sporting world what they could look forward to.  And no surprises she didn’t disappoint.

Her two knocks of 90 and 75* entertained the 1500 people who came through the gates at the Junction Oval. The other exciting prospect is in the spin ranks. New Zealand International Morna Neilson has been opening up and getting early wickets and young leg spinner Alana King has started with a bang.

Next Up: 6’ers x 2 and Hobart Hurricanes

Having lost the cool head of Megan White in the middle order to injury prior to round one (hoping to be back prior to Christmas) and then losing their first two games to the Melbourne Stars, some would have thought the Heat would struggle to recover.

Having debuted for Australia recently in the Ashes series she showed glimpses of how powerful she is. The six games so far has shown she has power, temperament, some touch and the capability of leading this batting line up to big totals.

The Heat are now 3-3 and although having played at least 2 games more than other sides, they are certainly making enough waves to be seen as serious contenders.

The #canetrain is full of steam and was well and truly on the express timetable for round one. The most impressive wins were defending two small totals of 125 v the Renegades and 117 against the Strikers. Death bowling specifically from Ronnie Pyke and Julie Hinter the defining factor.

After a disappointing WNCL the squad has regrouped and their enjoyment on the field and for each others success has been infectious to watch. 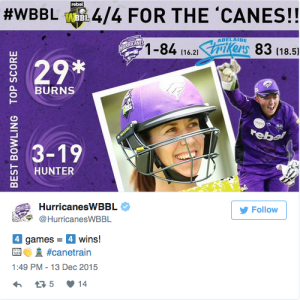 Up Next: Perth Scorchers x2 and Melbourne Stars.

An exciting round ahead with the first televised coverage of WBBL games on One.

And some interesting match ups too.

Not often you get to see Australia’s premier players up against each other but you will at Drummoyne Oval at 2.30pm on Friday 18th & Saturday 19th.

Stafanie Taylor, one of the most damaging batters in world cricket, will take on Australia’s inform pace bowler in Megan Shutt.

Stay in touch with all the news through;