Well a week after the hype of the final and I’ve finally got around to wrapping up what was an amazing experience in the IPL.

After a number of trips to India I’ve often said it’s a country of 4 C’s. Cricket, culture, curry & chaos. On game days all 4 were often present and is what makes working in this country truly wonderful.

The Mumbai Indians, after losing 5 of their first 6 games and looking all but lost, took out their second Pepsi IPL title. Says a lot for momentum coming into finals as CSK who won their first 6 of 7 games for the season couldn’t win two games in a row after game 7.

The final winners and losers and my pre tournament predictions;

Title holders:           Mumbai Indians (Chennai Super Kings Runners Up – missed McCullum at the top of the order for finals)

Purple Cap:              Dwayne Brave – Chennai Supers Kings (Sandeep Sharma 16th – no doubt will get better and better and can swing the ball both ways.) 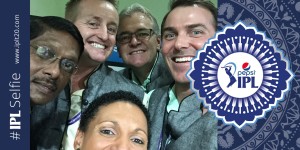 Working with Mike Haysman, Damien Martyn, Scott Styris and Laxman Sivaramakrishnan, as the backbone of Crew D comms team, was a great introduction and learning experience. Each of them provided me with great support and taught me some of the finer points of the game and broadcast.

Shiv – The man with 3 Gods in his name (Siva, Rama, Krishna) – was the king of nailing sponsor mentions. His insight specifically into the art of leg spin was a pleasure to listen to and explore.

Haze – The pro! Found myself sitting back watching and listening to the way in which he goes about things. His ability to link, and extend and engage is something I’ll continue to aspire to.

Damien – Loved the ease in which he got his points across and could go from banter to nailing a really important point of the game. Took me a while but I also got used to getting called ‘Melanie’ and not thinking I was in trouble.

Scott – At times it was like touring with a team with the prankster always present! A really good reader of the game with great insight. Commentating was never in his plans so I’m glad things changed on that front.

Tim – The Director who doesn’t leave you wondering! Having him in your ear through out the game you learn very quickly not to repeat what you hear! Keeping it fun is his motto and his rather bad jokes, match observations and moments of frustrations certainly did that.

Mod – Will miss the chats around sport, cricket, broadcast and big picture ideas and dreams. Easy to see why he’s regarded so highly in the industry.

Sure there was a heavy Aussie dominance, and we ‘may’ have enjoyed the weight of numbers against the Kiwi, but all in all I think all of Crew D (in front and behind the camera) had a great time together. 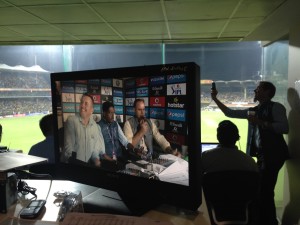