Two sports have made an impact on me while here in India for completely different reasons. We know that cricket rules. The passion for the sport probably coming from the same thing us Aussies can understand. A love of beating a country who played a large role in shaping us – England. Whatever way you look at England’s history in either country, invaded, governed or ruled, playing cricket and defeating them has played a big role in the psyche of our countries and fostered a love of the sport because of it.

India has a growing love of soccer but don’t be surprised to pick up the paper and read big articles on badminton, table tennis, shooting and chess. Yes chess!

And of late, on the back of the IPL, new premier leagues for hockey, soccer and kabaddi have emerged. Kabaddi is India’s version of AFL in the sense that it’s the traditional home grown sport however this sport is over 4000 years old.

I first came across Kabaddi in 2013 while sitting in Leopold’s Cafe in Mumbai during the ICC women’s World Cup. The Asian Games were being televised and with the volume down I sat and tried to comprehend what was going on. The best way to describe it is two teams of 7 either end of a court 10mx13m competing in a hybrid game of British bulldogs meets, dodge ball (without the ball), with an element of tag topped off with stacks on.

The end goal being for one person to venture into enemy territory, try and tag any opposition player and get back to their side without being hammered. Still confused? This might help –

Oh and while the “raider” does their thing they must constantly say Kabaddi, Kabaddi over and over out loud until they score or get caught. Got to get back here in July sometime to check out Pro Kabaddi.

The other sport that has taken up a lot of discussion time this week has been boxing. The Floyd Mayweather v Manny Pacquiao world title fight had Crew D a buzz.

I know it’s a sport that can divided and I would be confident in saying that it has never been described as being like synchronized swimming but for me that’s the best way to describe my feelings towards it. Like “synchro” I look at boxing and can appreciated the amazing physical fitness associated with being the best. For clarity, synchro’s spend 3min of the 4min routine under water and can swim 75m without coming up for air, Pacquiao was doing 2500 sit ups a day in camp! I can appreciate the skill level and precise timing and marvel at the ability to smile while in excruciating physical pain. I don’t have the desire to seek out either sport but if it’s on I could well get caught watching for a moment or two wondering …why!?

As we were flying from Bengaluru to Chennai when the fight was on meant there was a call to arms in the weeks preceding to try and find a solution to watch the replay. Phones where switched off to avoid the result, the usual banter was being regurgitated from some article you read to make you sound knowledgeable, but who knows if it’s right or not, and of course you had to then pick a side you were supporting and aside you thought would win.

Most of Crew D were on the side of Manny Pacquiao but picking Floyd Mayweather to go 48-0 fight wins and pocket his cool $180 million. No typo folks, $180 million dollars to take out what they called fight of the century. Yes the century is only 15 years young so this could be used many times over but you get the gravity of it all. 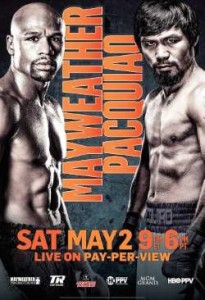 It had everything Hollywood could dream of in terms of the fighters backgrounds.

Floyd, the favorite, is just a lovely bloke who you can’t help but love…not! The villain of the fight for most and the Vegas crowd booed him on cue perfectly. Born into a boxing family he grew up in new Jersey surrounded by drugs and poverty however this is no way an excuse for his later life. He served time for domestic violence and battery against his girlfriend. He calls himself Money or TBE, The Best Ever, and in his corner was Justin Bieber. Picture painted?

Manny on the flip side is from a poor and humble upbringing in the Philippines. A deeply religious man who has become a congressman and was in Times top 100 most influential people in 2009. Oh, he has been accused of tax evasion, cheating on his wife and doesn’t believe in gay rights but let’s not let the truth get in the way of a good story.

So while we sat having paid 400 rupees ($8) to hire the hotel bar and projector. Andre Agassi & Steffi Graf, Beyoncé & Jay-Z et al sat ring side for $350,000 a ticket to watch Manny chase and Money defend for 12 rounds.

There was no Apollo Creed knockdown and Rocky come back. There was no Rumble in Jungle, Ali v Foreman, blow for blow exhausting 8 round epic. It was a unanimous points decision to an exceptionally cocky and smug Mayweather. The smiling, happy go lucky Pacquiao at the end of day was no match for a boxer, with all his faults, being one of the greatest pugilists of all time.

The irony being that by the end of the celebrations, speeches, hat on sideways, arms crossed gangsta style strutting around I wanted to punch him myself.