So after some great weeks down south, Crew D finds itself in the northern Punjab capital of Chandigarh. The Australian Youth team played here in 1994 and my lasting memory was that we shared the hotel with a group of WWF wrestlers from the USA. I am hoping to have more cricket memories this time round.

Chandigarh is India’s first ever planned city and it’s noticeable from the get go. Wide thoroughfares, footpaths, grided streets and suburbs with as structured names – Sector 17, Sector 20A. With a huge army presence and base due to its close proximity to Pakistan there was a thought to try and get to the daily flag lowering ceremony at Wagah on the India-Pakistan border.

The 275km – 5 hours drive put a stop to that until we then thought we could ask the British pilots staying at our hotel for a flight up. Can someone please remind us we are ‘has been’ cricketers commentating on a game played only in the Commonwealth, not A grade sporting celebs! Check it out though and I dare anyone over 30 not to think of John Cleese in Faulty Towers.

Game day was between George Bailey’s bottom of the ladder King’s XI Punjab (and for clarification it’s Pun – Jab not Poon-Jab) and the Royal Challengers Bangalore who are in the hunt for finals. Stifling dry heat up until 2 hours before the game and then a monster downpour and constant drizzle which lead to a 10 over a side game starting at 10.30pm.

The crowds up north are completely different from down south. More like a stadium of MCG Bay 13 style supporters filling the entire ground. As the predominantly male crowd can get a tad rowdy there have been some interesting additions to the ground. A moat, yep as in medieval times, that surrounds the ground separating the players and crowd. And the stages for the home and away cheerleaders are also surrounded by a cage of netting to deflect any items that may get thrown in their direction. 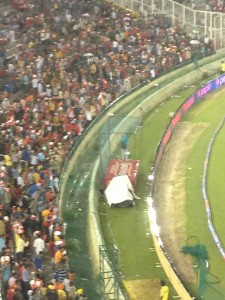 One constant is that they are just as loud! Even during the two hour delay, no one left. With no cover from the rain, they were happy to be drenched and singing along with the live band playing current Punjabi dance songs. The DJ not afraid to drop a few choice expletives either. Nice to hear local music getting pumped out though even if it did mean I felt like a nanna thinking ‘you can’t say that can you?”

Check out what is played at the grounds in Mohali.

Nice win for the home team KXI after a tough competition. I’m over trying to read the Gayle curse as he failed with me here. Maybe it’s all in my head?

Not in my head is the delight in which the comms team had with Damien Fleming joining us for the game continuing the strong Aussie flavour even with Scott Styris’ official complaints to the BCCI.

After playing in the 1997 World Cup (for a much funnier account of touring India read – Julia Price 1997 World Cup Tour Diary)   I was lucky enough to spend two awesome weeks in Nepal. A stunningly beautiful country with the friendliest of people. The earthquake two weeks ago was never going to be a anything but devastation to a country with poor infrastructure and resources.

Our first day in Chandigarh brought our thoughts back to Nepal as another major earthquake hit. Sitting in my hotel room I knew immediately it wasn’t good. My second floor room swayed and creaked for a solid 30seconds and we are well over 1000km away from where the 7.4 tremor hit. Crew D is looking into ways we can do our bit for fundraising towards their recovery. 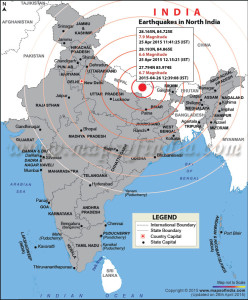