In less than five hours time one of the world’s great races is about to start. Ironman’s World Championships. Kona.

As a kid I was a doer. Out and about wanting to try every sport and any childhood adventure that was on offer. However, one day a year I found myself glued to the TV watching a sport and loving every minute of inactivity. For hours I sat completely bewildered and equally inspired by athletes and a sport I never had any interest to compete in and have never tried since.

We all know that the American’s are brilliant at producing stories that nails the drama and encapsulates emotion and adversity. They know the recipe to pull on our heart strings with stories, that even for the hardest person, brings a tear to the eye.

As if people pushing their bodies to the absolute limits over a 3.85km swim, 180.25km bike ride and then a 42.2 km run wasn’t enough! And a little reminder you have a 17 hour time limit to complete a race usually run in searing heat in the high 30s, 90% humidity and on lava fields with cross winds reaching 100km/hr. No, that’s not emotional enough, so they would throw in the journey of the father who would compete by carrying his disabled son, or the returned servicemen competing with no legs.

SWIM: The cut off for the swim segment is 2 hours 20 minutes after your designated start time.

BIKE: The bike cut off for the bike course is 10 hours and 30 minutes after your designated start time.

RUN: The cut off time for the Ironman World Championship is 16 hours and 50 minutes after your designated start time. 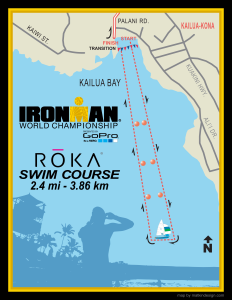 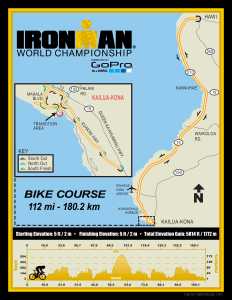 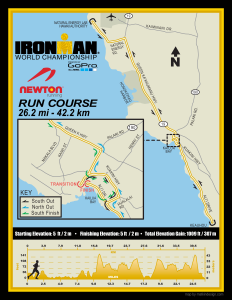 Well this year I’ve been taken back to my childhood memories of the Hawaii Ironman. I’m excited again to wake up and watch the day unfold. However this time it isn’t just to watch.  This time it’s personal. I know an athlete, a first timer. This time I know first hand the ridiculous training workloads, life choices and constant mental and physical battles they go through just to qualify. I now understand that the race itself isn’t the be all and end all. It’s about seeing what people are willing to put themselves through for the months before to reach their ‘why’.

‘Race day isn’t the challenging part. It’s the REWARD for the months of hard work while you were training.”

For the thousands of age group qualifiers so much of Kona will be about a personal challenge. For the professionals the desire to be World Champion has produced some of the most epic battles. The 1989 Mark Allen v Dave Scott stroke for stroke, cycle for cycle, stride for stride from start to finish was hold your breath viewing. Yet the excruciating painful, edge of your seat moment of the final 100m between Welch and Ingraham is still etched in my memory.

Still amazed that was for 4th place!

I grew up with Paula Newby Fraser. A Zimbabwean athlete and the most successful Ironman in history. A lazy 8 wins, including 6 of the 10 fastest female finishes ever. This was on the back of Lyn Lemaire becaming the first female to participate in the Ironman Triathlon World Championship in 1976. Amazingly, her 12:55:38 finish placed her fifth overall. While Lyn was kicking some serious long distance butt in 1976 it’s weird to think women weren’t running the marathon in the Olympics till 1984.

The men’s and women’s course records are both held by Australians. Craig Alexander set the men’s record in 2011 in a time of 8:03:56. Mirinda Carfrae holds the fastest women’s time of 8:52:14, set in 2013.  This included a historic moment in sport where Carfrae’s marathon of  2.50.38 was faster than the men’s champion for the first time ever. The performances of  women in Ironman, has been for years and continues to be, pushing the men’s times.

Combine this with equal prize money and a sport that boasts 40% of its board being female, plus a female CEO and Chair of the Board (Feb 2014) and you have a leader in the sports equity field.

With so many positive plays for women in the sport it is surprising to read that of the 2500 qualifiers for Kona, males make up 72 percent of participants (1,717 athletes), while 28 percent (664 athletes) are female. And in the professional field 58 men and 42 women were offered the opportunity to register for the race. Yep, offered an opportunity.  Which begs the question why isn’t it 50:50?

It’s a topic I’ve only just heard about and am keen to know the “why’.  I’m starting with Sara Goss – http://saragross.blogspot.com.au – and WITSUP.com who are doing some superb work in and around women’s in triathlon.

This year there are over 20 athletes competing in wheelchairs and one bilateral arm amputee. I’ll give you a few moments to contemplate swimming and changing a flat with no arms! The oldest woman competing is 76 and she only took up triathlon at 67. How does that make you feel?

It’ll be a tough night of sport watching with the Wallabies hopefully overcoming Wales in the Rugby Union World Cup and then joining the triathletes at the start of the big race. Whatever their purpose, their drive, their why, I hope they find their groove, run the race of their lives and thoroughly enjoy the run down the red carpet.

Me? Well I’m once again looking forward to watching from the comfort of my couch.