My first memory of watching an Olympic Games was on an old black and white TV (knob dial and antennas) with Misha the Bear opening the 1980 Moscow games. I was glued to events like the heptathlon due to Daly Thompson, the battle between Coe and Ovett and cheering on an unknown (at the time)  Merlene Otty as she took on the dominance of Germany and Russia in women’s track and field…hmmmmm.

Eight Olympics later and my TV has improved slightly thankfully. I couldn’t tell you anything about the opening ceremony as I turned it off after a comment of “just” 400 years of slavery came across wrong to me. And no doubt more than one athlete will have won bronze and then go onto many more golds in Olympics to come.

From an Australian perspective I’ve got a massive crush on the Pearls, the Aussie Rugby 7s team. Strong, fast, agile, athletic, tough, graceful, genuine, inspiring… and gold medalists! And Anna Meares and Kim Brennan as flag bearers were the perfect book ends to Rio on whatever level you want to go.

However, there were a few funny, frustrating, inspiring and “what the” moment’s I really wanted to share to ensure we haven’t missed some pretty big learning experiences.

The broad range of sports and events at the Olympics gives rise to appreciating just an even wider range of athlete. There is a fantastic poster designed by Wendy Fox Project – Female Gold Medalists which highlights and celebrates all the different body types that can be and are the best in the world.

Not all body types are appreciated or admired as much as others sadly, which is a whole other discussion, and there is still one space that has so many people unfairly judging. Female athletes with hyperandrogenism, or elevated testosterone levels, are so often looked upon, judged and excluded on their looks alone. Why? My gut feel is because they don’t fit our concept of what a female “should” look like. Their so called manly features have people thinking that their elevated levels of testosterone has an unfair advantage on the sporting field. 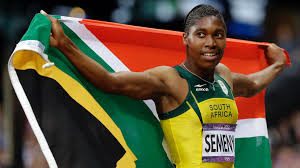 Well let’s just remember that the sporting field has never been and will never be an even playing field on a sweeping range of areas. There has been a lot written on this topic from both a social and physiological view point that articulates it a whole lot better than I can. So here you go;

Let Caster Run! We Should Why Caster Semenya and Dutee Chand deserve to compete (and win) at Rio 2016 – Silvia Camporesi

The Importance Of Cheering For Caster Semenya – Lindsay Gibbs

When Wayde van Niekerk smashed Michael Johnson’s 17-year-old 400m record to win gold I, like most, thought it was his grandmother the camera kept turning to. Shame on me!!! It was wasn’t his grandmother, although she is a great grandmother, Ans Botha is his coach. 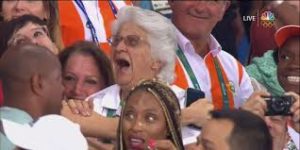 The media has a lot to answer for on so many fronts. Some great and some …well let’s go to the video tape to highlight the head shaking, sexist moments from the 1950s Olympics.

I think Pia Sundhage, Sweden’s football coach, deserves the gold, silver and bronze for her responses during these Olympics.

Bring on Tokyo, minus the sexism.