It was Crew D’s last game in southern India before we head north to Chandigarh for our final two round games and it was a night of firsts for me.

CSK taking on the Rajasthan Royals in a crunch match as teams jostle for finals positions with the winner going to the top of the table. No pressure Jones, as I get given the chance to host both the coin toss and post match presentations as well as a lead stint and pre and post match with Sony. Yikes!

My biggest concern was the first line welcome as the big guns like Ravi Shastri and Rameez Raja put it on massively with a Hindi welcome that really revs up the crowd. I wasn’t feeling over confident that my Aussie accent would win over the Indian audience so stuck to a fairly ho hum welcome before letting MS Dhoni, arguably the best tactical brain in T20/ODIs and Steve Smith, one of the most successful starts to a captaining career, go about the coin toss. 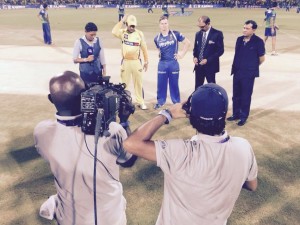 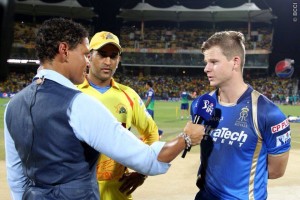 In the end a comfortable win to CSK with Dwayne Bravo also taking over the purple cap (most IPL wickets) from Ashish Nerha  so another little add on for the post match. Oh and as it was CSK’s last home match Dwayne Bravo entertained them with his newly released song Chalo Chalo. Stay tuned for a musicians of the IPL blog update.

It might also be time to pop out an apology to a few of the people I had to introduce at the post match presentation too as I am 100% certain that I butchered a few names.

So long Chennai and Bangalore. You’ve been great hosts. Looking forward to seeing what Chandigarh has to offer.