Ashes. History, tradition, rivalry, Baggygreen, tests and who would’ve thought one dayers and T20s too! This summer the Southern Stars have the chance to add a very special piece of silverware (well ‘ball wear’ to be precise) to the cabinet to sit along side the ICC T20 and 50 over World Cup trophies.

We are 5 days into the Ashes and if the first two games are anything to go by it’s going to be a classic series. Both for the points for the Ashes and ICC Women’s championship. My head was just getting around the game at Taunton when the 2nd game at Bristol impressed just as much.

Cricket aside, the standout performance has been the ECB.  The investment, support and vision to turn women’s cricket into one of the countries most marketable and recognised national teams has been amazing. Although, they may have a challenger on their hands after the recent success of the English soccer team – I still get a pang of heart ache for Laura Bassett’s – Own Goal at the recent FIFA World Cup.

However, like Australia and England in cricket, the desire to retain top status brings out the best in both which in turn connects more people to the contest, old and more importantly, new.

As exciting as it is to witness what is being done for the game here in England it does make me wonder where does this leave the rest of the top 8 nations?

Having seen first hand  a number of home and away series over the last few years, talked to players, administrators and the media involved in the game, there is no doubt there is a growing divide between England, Australia and the rest of the world.

Here are just a few noticeable areas where these two nations are leading the way, specifically in and around this tour;

Sky Sports UK (TV) and the ECB have again led the way in the broadcast arena. This is the first ever women’s series to be fully televised across all the ODI’s, test and T20s. The commentary team with a heavily weighted female presence includes former internationals Clare Connor, Isa Guha and Holly Colvin from England joining the Aussie duo of Lisa Sthalekar and myself. 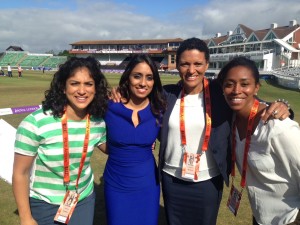 Taunton kicked off the memorable moments with Isa Guha becoming the first female presenter of a cricket broadcast in England and in Bristol we had the very first all female in studio cricket panel.

BBC radio through 5 Live Sport  are also covering every match and providing listeners with ball by ball coverage. 2009 World Cup Champion Ebony (I can’t fit my full name on my passport) Rainford -Brent is along side England’s sports journalist of the year in 2014 Ali Mitchell. They also have a few pop in’s from the Sky Sports box to add to the cricket and often random banter. I’m not sure how I weaved into the show the “is it safe?” line from Dustin Hoffman’s 1976 movie Marathon Man, but that is the fun of radio.

And are people watching and listening? You bet they are! And all over the world too with New Zealand and the West Indies but a few regions picking it up. Sadly, its not being shown on Australian TV so thankfully Cricket Australia are streaming it through their web site. So the ridiculous comments that you hear from people saying people aren’t interested in watching women’s sport are being blown out of the water daily.

Still waiting on the official viewer numbers but from all accounts the execs and number crunchers are very happy!

Then as if not wanting to be left out of all the fun the papers have also joined the party in a big way. If people were expecting a quiet breakfast Wednesday morning at The Castle Hotel in Taunton I apologise  as the morning TV news and national papers blew me away.

Firstly the BBC’s TV morning breakfast show, equivalent to Australia’s The Today Show or Sunrise put the win where it deserved to be, at the top of the show. Tour de France leader Chris Froom (British)  kicked things off and then came the report of England’s 4 wicket Ashes win over the ODI World Champions. Great footage, positive reporting and a message of get on board. Following this was the selection changes for the men’s 3rd test, English Premier League transfers and heavy weight boxing. I know right…What The?!

As I skipped to breaky, one because of the report and secondly I’m already starting to feel the Heathrow Injection (added pounds through a slightly different diet creeping in :/)  I had another “get the hell outta here” moment.

The front page of the Telegraph sports edition and the back page of The Independent had the result plastered across the entire space available. Cynics would say it was just because England won…well wash your mouths out as their loss was just as prominent a few days later. 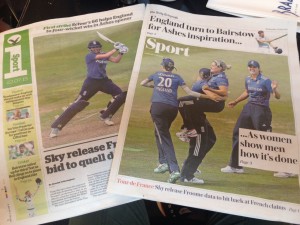 And then the loss… 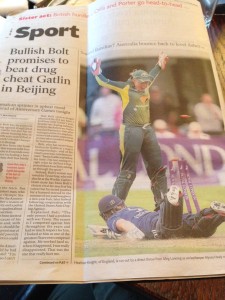 Again displaying positive, athletic, skilful, emotive, celebratory images. I’ve been a huge fan of Sport England’s This Girl Can campaign and the legacy of London 2012 is not fading at all.

I might have a little crush on The Independent at the moment too as they are very pro active around the women’s sport  Women’s Sport Best Buy For Business and participation space Sports Science boost in Schools.

As I arrived in Taunton off the train from Paddington the gates proudly displayed information about the one off game in town.

The amount of shops I have headed into to be asked if I’m here for the cricket means I now no longer look over my shoulder expecting Ricky Ponting to be standing there and actually realise they are talking to me.

Then there is the sponsor support from Waitrose and Kia for English cricket. Each player with their own car and Waitrose sharing equal space with Cook and Edwards, Ali and Taylor. 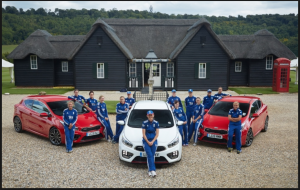 Athletes! These players could easily be slotted into a photo shoot for the WTA, FIFA, IOC and not look out of place. The professional (Eng) and semi professional (Aust) world for both teams gives these players the chance to train accordingly and they look and act the part like no other teams in world cricket. Even the fact that that players now have single rooms on tour speaks volumes for where they are at. Gone are the days of being billeted on tour in 1998 and having to share a double bed with a team mate in India in 2004!

Take a bow Taunton and Bristol. The 3500+ strong crowds at each venue paid £10 each to come and see two excellent games and played their part in England’s game one win. As the chase came into the final stages with Lydia Greenway and Nat Sciver starting to motor, the crowd joined in for what was a match winning partnership and added another exciting element that the women’s game has been missing. I can’t wait for the first T20 in Chelmsford where I think the crowd there will take it to a whole new level.

Women’s cricket has changed enormously in the last 5-10 years and the other countries are looking at their own ways of developing and expanding the support around the women’s program.  The current divide certainly isn’t ideal on a number of fronts.  Here’s hoping that the other national bodies will take notice of the lead being taken and ultimately join the party.

This is one party though where being fashionably late might not be the best plan of attack though.