If you like sport, it would be hard not to acknowledge that 2015 has been a fairly monumental one for women’s sport here in Australia. We had a year where a number of major events were on and our awesome teams and individuals did what they have been doing for years – winning. And if not winning putting on a display that can only make you proud.

The Australian Diamonds defeated New Zealand to win the Netball World Cup, The Australian Southern Stars won back the Ashes by winning for the first time in 14 years on English soil, Kim Crow won another rowing world title, Bronte Campbell won gold in the 100m FINA World Championships, the Matilda’s made their way through to the quarter finals of the FIFA World Cup.

Then there were some historical moments too including the first ever all female driving team at Bathurst and of course Michelle Payne becoming the first female jockey to win the Melbourne Cup.

And as we round out the year another historic moment for women’s sport, and cricket, the launch of the Women’s Big Bash League. It’s another game changing moment with a domestic competition being reshaped and launched with more fan fare than I’ve ever seen before.

Cricket Australia, as one of the countries largest and most powerful sports, is really flexing their muscle to ensure the WBBL has the support and foundation to ensure the inaugural year is a successful one.

The media coverage has had women’s cricket front page news! A first in my memory. The BBL teams have ramped up their social media support around their new teams. The Stars and 6’ers look to have embraced the concept of “one team” the best so far with a lot of shared promotions across their men’s and women’s teams. 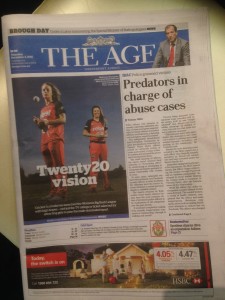 Sports retail store Rebel won the naming rights and all teams have new sponsors to the women’s game. And of course there will be 8 games live on free to air television with Network Ten broadcasting all the double header games. And I can tell you everyone at Ten is pumped to be involved and focused on delivering the highest quality broadcast possible. From Andy Maher, Lisa Sthalekar and myself through to the production crew.

There have been some great preview articles on Cricket Australia’s web site – WBBL|01 Squads – so no need to rehash their analysis. So I’ll just put my money where my mouth is and rate each teams chances of playing off in the final on January 24th.

Yes lots of unknowns. How will teams and players handle the pressure of producing quality, entertaining games – especially for the televised games? Will the international players step up and provide consistent match winning performances. Will back to back games on the one day favour certain teams?

One of my favorites! I tipped them a few weeks ago based on the fact their selecting a consistent and well performing squad in the WNCL is basically their WBBL team. And they are now full of confidence after taking out their first WNCL tile last weekend. Greta mix of in form players and X factor players like Devine & Taylor.

Another settled squad with just the inclusion of the two England Internationals to their all Queensland list. They cover off pace, spin, allrounders and clean hitters. And having 3 players who haven’t played enough games for Australia to qualify them as ‘restricted’ means they have a deep list. Will be knocking on doors come finals time.

Coming off their best domestic season last year the Hurricanes have the ability to cause a few upsets but would need a very special season push for the final. Probably a current Australian player short, they will reply heavily on their Internationals.

Spin, spin and more spin. It could turn out to be a shrewd move, however my gut feel is balance will be key and that might be difficult with 8 spinners and no senior quick to turn to. Like the Hurricanes short a current Australian player and I can’t see them in them mix.

The best batter in the world is also one of the sharpest captains going around so the Stars under Meg Lanning will be amongst it. Good variety in the Internationals and Katie Mack is in great form coming from ACT.

They should set a few batting records if their top order clicks! Fire power galore with some the biggest and hardest hitters in the game. However if they don’t fire they could be in strife. They are most peoples tip for the title and you’d be silly not to have them in your top few.

Experience in abundance across their restricted players which will count for a lot in key moments. A new role for Ellyse Perry captaining and for the first time in a long time a NSW team won’t go in as favorites.

The Thunder have stuck with local restricted players except for West Indian dynamo Stafanie Taylor. Bar Taylor it’s an accumulating batting line up more than anything else so Like the Renegades and Hurricanes they’ll shape finals with key wins and unearth some young guns but won’t be playing on January 24th.

I’m not playing or involved with any of the teams but I’m nervous. It’s a good nervous though. One based around the excitement of what the WBBL can do for women’s cricket and sport in this country.